Skip to content
July 25, 2016 intheplottingshed
5.0 out of 5 starsRead all three of the series.

Format: Kindle Edition
\”I became caught up in this series. A few very late nights still up and reading. All characters were very well developed.
I need Kleenex at times,but that\’s what tells you you\’re in love with these characters.
I would have liked to know more about the manor and the children. What happened with the other dear ones.
Do you think another book might let us know the answers ? Will definitely recommend to friends.\”
So pleased with this review of the whole series posted in the US. Really motivated now to write Woodbine and Ivy which
will take the characters from The Katherine Wheel Series into the arena of the second World War – as if they
haven\’t suffered enough! Now the children of Katy and Cassandra have to face their life-changing challenges as
they deal with another global drama and readers will find out exactly how the two families\’ destinies finally collide.
Lots of research for this one, so it will take some digging for that, but I\’m hoping to get it out next year, 2017. I\’m just
polishing off the very different new book, The Rose Trail, which should be published this autumn, 2016.
Watch this space! 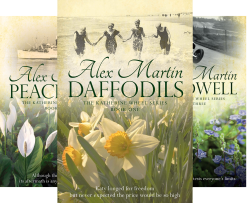