I fulfilled a lifelong ambition on Tuesday.  I went back to Devizes where I used to live and took my books into the bookshop there. The Rose Trail is set in Devizes and the historical section is based on the battle of Roundway Down an iconic range of hills above the town. Oliver\’s Castle – which is not named after Oliver Cromwell, who joined the English Civil War after this Royalist triumph – looked even more magnificent than ever, laced with frost. The ground underneath my feet was still frozen and the tiny segments where it had thawed were lethally slippery. I went to the very spot where the Roundheads fell to their deaths and shivered – and it wasn\’t from the bitter wind. 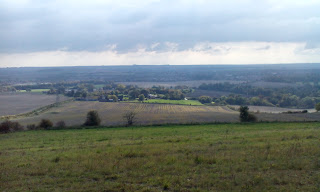 The Katherine Wheel series is also set nearby. We used to live in Erlestoke, just outside Devizes, and the village above its steep valley is called Great Cheverell. These are the two villages that I\’ve named Upper and Lower Cheadle. Cheadle Manor itself is entirely fictional but there was a big estate between the villages. It burned down in World War Two and has now a much more prosaic and sombre role as one of Her Majesty\’s Prisons.
However some of the minor details of the stories do come from real anecdotes from our time there. The book is dedicated to Old Harry for a good reason. A raconteur who mined a rich seam of a life of nearly a hundred years, Harry could tell a yarn  like no other. He had a wooden leg, lost – not in the war as you might suspect – but through scything it through while working on the railway sidings and cutting the grass. It was Harry who told me about the village pump being the only water supply – the one that had such a devastating effect on little Florence in Daffodils. He told me how the row of cottage in which we both had little 2 up, 2 down homes shared a tap at the end of the row at first, then one between two – which were still there – and then the great day dawned when they had sinks installed in lean-to kitchens at the back of the cottages. A sink of their own; he still remembered the joy of it.

We (and Harry) lived in the row of cottages to the left.

He\’d lived through it all. As a boy he\’d worked in the walled garden above our cottages. Like everything else it belonged to the estate, and provided it with fruit and vegetables. It must have been glorious in its day, as the beautiful warm red brick walls curved around the southerly slope to catch all the rays. Not easy in such a steep valley. It was a work of art. Harry remembered those walls covered in apricot and peach trees, espalliered against the terracotta clay bricks. As a boy he was a runner, carrying fruit and vegetables up to the big house, across a bridge that had been demolished after the fire in World War Two.

It was Harry who was really the boy who ate half the strawberries by the time he reached the cook at the big house. And it was because of Harry that scales were introduced into the garden so that cook\’s scales matched the weight of the produce before and after it was ferried across!
I look back with great fondness on that time living in that historic village, and not just because both my children were born there. It is a wonderful feeling to know that the story that grew out of that time is now sitting on a shelf in the local market town\’s bookshop.
A heartfelt ambition achieved.