The writing life is a wonderfully varied one. Not always, of course. A great deal of time is necessarily spent alone, tapping the keyboard (on a good day) or staring out of the window, hoping for inspiration and focus to miraculously move the story onward. Done a lot of that lately!
However, there is fun to be had.
Yesterday took me to The Heritage Centre, Maidenhead. There, I \’flew\’ a simulated World War Two Spitfire plane. At last, I could understand why one female pilot of the Air Transport Auxiliary service (who have their museum house at the centre) felt that the little fighter plane had been designed for a woman, so responsive was it to her touch.
I only had fifteen minutes and no danger to sharpen my wits but I managed to lift off, loop the loop and attempt to fly (unsuccessfully) through and under London\’s Tower Bridge. The landscape, as you can see from the photo below, was simulated on three computer screens and very realistic, especially when the simulator banked dramatically! The instructor was endlessly patient and managed to convey a lot of detail in a few minutes.
I was surprised to find two pedals, one for each foot, which acted as rudders during take-off. The steering mechanism, or joystick, is circular and so easy to manoeuvre it only takes one hand, the right, while the left hand is deployed on the forwards and backwards motion of the throttle.
Other exhibits included the uniforms, log books and anecdotes of over 1200 pilots plus ancillary staff who made up this essential service during the second world war. 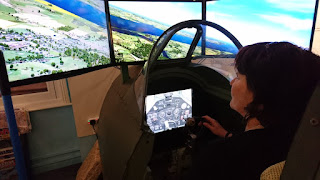