I have just completed the first draft of Woodbine – remember I\’ve been banging on about Woodbine and Ivy for a very long time? Well, it really is going to be Woodbine…and…Ivy. Two books, instead of one, will complete the Katherine Wheel Series.
Why? It\’s such a huge story. I thought the research for World War One was immense but that for World War Two dwarfs it. I\’ve found it equally fascinating but the era is so very different. What is clear though, is that WW2 was in effect part two of the same conflict – unfinished business, you might say.
My poor characters, the children of Jem and Katy, Cassandra and Douglas, whom you may have met in the sequels to Daffodils, are really put through the wringer in this second global conflict.
I have begun to write Ivy, the fifth and final book in the series, when I hope to bring the whole saga full circle.
I daren\’t say more at this stage but will wait, on pins, for my editor\’s verdict. 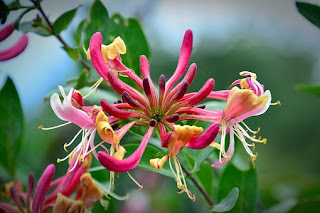 Did you know that woodbine is another, country, name for honeysuckle?