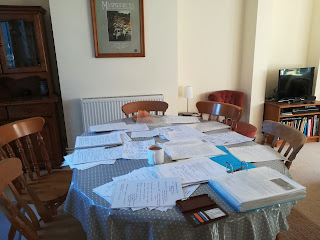 Writing HQ has temporarily decamped to the dining room. So many notes and files have been accumulated for Ivy now that it became necessary to spread them all out and reorganise. In researching anything to do with the Second World War, it\’s impossible to avoid plumbing the shocking depths of man\’s inhumanity to man (particularly in viewing the scenes of the Nazi death camps) but also total heroism in the sacrifice of so many lives to win the peace for future generations. We are very lucky. However, it\’s been fascinating piecing the drama together and, even though the outcome, seen in hindsight, wasn\’t in doubt, there were moments of high tension in its replay during crucial times when you can see no-one knew how things would turn out. It is truly humbling to learn what the combatants of that fierce conflict went through and only hope I can do them justice in my next two books.
Lottie, Cassandra Flintock-Smythe\’s eldest daughter, is deeply embroiled in this war but her story is emerging through the chaos. She\’s impressing me as a character, and hopefully, readers will love her too, when the story is finished. The other characters in \’Willow\’, Isobel, Al and young Lily, all have their own parts to play in this epic battle and I\’m enjoying listening to them as I guide them, not always willingly, towards the destiny already carved out for them. Ah, the power of the pen!
Hopefully, publishing will happen later this year, when \’Woodbine\’ will probably be released at the same time as \’Ivy\’. In essence, they are two parts of the same whole and should be read together. It\’s a little strange, as a writer, not to publish when a book is completed, as Woodbine is, but the details may change a little as Ivy develops, and further fact-checking may need retrospective correction.
\’Willow\’  (only 99p for the kindle copy) is out now. It\’s only a little book but it introduces the characters of Woodbine and Ivy as children and bridges the gap between the generations of the first three books in \’The Katherine Wheel Series\’ and the two to come, \’Woodbine\’ and \’Ivy\’, which will conclude it. 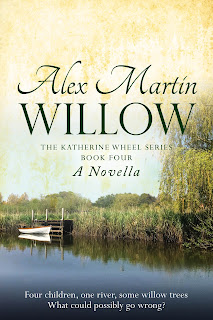 3 thoughts on “Cooking a book #http://mybook.to/Willow”