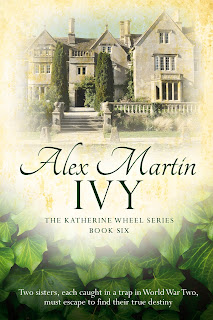 Ivy concludes The Katherine Wheel Series and in fact, is a continuation of the story begun in Woodbine. Woodbine and Ivy were originally intended to be one book. The title comes from an old country folk song and the lyrics are quoted at the beginning of Woodbine. However, this epic tale grew so large I had to split it into two parts. Lots of readers have contacted me after finishing Woodbine and in search of its partner, Ivy, so I\’m excited to announce that it will be published very soon.
In the meantime, I\’m proud to reveal the cover, created with the very professional help of  Jane Dixon-Smith of http://www.jd-design.com. Jane worked with me very patiently over many subtle changes and tweaks to the images until we arrived at the final product to our mutual satisfaction.
The house depicts Cheadle Manor, in Wiltshire, the frequent backdrop to all six books in The Katherine Wheel Series. I always had a very clear vision of the manor as I wrote the books. It isn\’t based on any one particular house that I\’ve seen, more an amalgam of some very beautiful ones I\’ve encountered in Wiltshire over the years I lived there. In my mind\’s eye, it was always clearly like this one on the cover of Ivy, with three stone gables pointing up to the sky and the graceful steps descending from the front door.
Here is the paperback version with the description of the contents on the back page as a teaser! 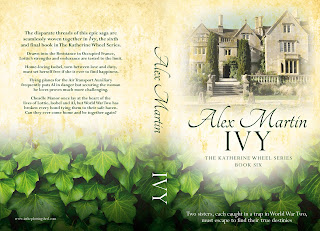 Watch this space for an announcement about the publication date.