I’m delighted to take part in the Wild Sage autumnal festival with Denise Birt of the Wild Sage Book Blog. I have just completed a six-book saga called ‘The Katherine Wheel Series’, based on two families, one rich, one poor, living in deepest rural England. Book One, ‘Daffodils’, sees Katherine Beagle as a humble, frustrated house servant and her employer’s daughter, Cassandra Flintock-Smythe, barely notices her – until scandal hits. By Book Six (the recently published ‘Ivy’) these two women are both heads of different dynasties and firm friends. In between, they go through many trials and two World Wars with changing fortunes, including heart-rending tragedies and hard-won triumphs. 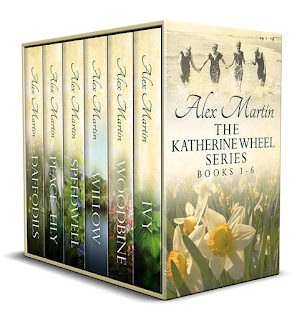 As ‘Daffodils’ is currently #FREE, I’m adding the second book ‘Peace Lily’ to my giveaway, so the lucky winner will receive two ebooks instead of one! All six books have hundreds of reviews with an average star rating of more than 4.5*s! 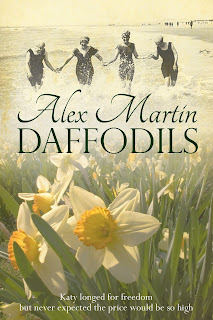 DAFFODILS: BOOK ONE OF THE KATHERINE WHEEL SERIES.
Winner of the New Apple Literary Award for Excellence in Independent Publishing 2019 Medallist Winner E-Book.
Daffodils is a love story, whose tender heart is almost torn apart through the tumultuous challenge of World War One.
\”A profound meditation on love and loss and the perils of war\”: Bookbub
\”Absorbing, involving, unputdownable, honest, great characterisation\”. Indie Book Bargains Featured Author Book of the day June 25th 2013 and was chosen to be in the first edition of the Fussy Librarian\’s selection. 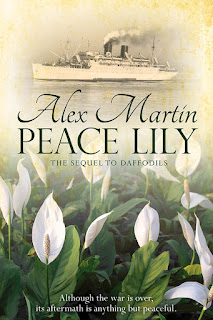 http://rxe.me/O694ET4
PEACE LILY
Peace Lily is the sequel to DAFFODILS and book two of the \’Katherine Wheel\’ saga.After the appalling losses suffered during the First World War, three of its survivors long for peace, unaware that its aftermath will bring different, but still daunting, challenges.Katy trained as a mechanic during the war and cannot bear to return to the life of drudgery she left behind. A trip to America provides the dream ticket she has always craved and an opportunity to escape the strait-jacket of her working-class roots. She jumps at the chance, little realising that it will change her life forever, but not in the way she’d hoped.Jem lost not only an arm in the war, but also his livelihood, and with it, his self-esteem. How can he keep restless Katy at home and provide for his wife? He puts his life at risk a second time, attempting to secure their future and prove his love for her.Cassandra has fallen deeply in love with Douglas Flintock, an American officer she met while driving ambulances at the Front. How can she persuade this modern American to adapt to her English country life and all the duties that come with inheriting Cheadle Manor? When Douglas returns to Boston, unsure of his feelings, Cassandra crosses the ocean, determined to lure him back.As they each try to carve out new lives, their struggles impact on each other in unforeseen ways in this heartbreaking romance.Peace Lily is about the boundaries between traditional values and the modern age of the 20th century, between men and women, young and old and, in post-war 1919, these are tested as never before.A third book, SPEEDWELL, takes the characters into the daring arena of motor racing in the 1920s and Katy\’s defiant bid for independence. Book Four, WILLOW, (novella-sized) bridges the gap between the generations as the children of Cassandra and Douglas, Jem and Katy embark on a summer adventure that goes disastrously wrong with dire consequences. The four children, Lottie and Isobel, Al and Lily, are on the brink of adulthood and the outbreak of the Second World War in Book Five, WOODBINE. Their lives separate as they are each forced to follow different paths through the war. Lottie is stranded in occupied France after a bitter family feud and gets drawn into the French Resistance; Al faces many dangers as he flies planes for the ATA, and Isobel, torn between duty and love, becomes a Land Girl. Can they come back together in Book Six, IVY? You must read the final book in The Katherine Wheel Series to find out how the whole saga reaches its dramatic and satisfying conclusion.