The launch party of The Rose Trail was great. I had a thoroughly good time and met some great people. My reward came later in the day as I totalled three reviews (The Rose Trail went live a week or so ago). So here are the first impressions: 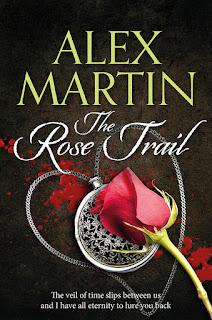 5.0 out of 5 starsTragedy, comedy and history

The Rose Trail is a great mixture of amateur detection and supernatural riddles, with dramas of the present day crashing painfully into dramas of the seventeenth century. A time when the country was riven by civil war, religious bigotry, totalitarian rulers, rebellious subjects wanting liberty, and families divided – not so very different from some events today. I love the story of the past, with two brothers at war over politics and love, but I also adore the two present-day protagonists, Fay and Persephone, so very different, but linked by an uncomfortable way with the desperate touch of the past. Ghosts need to find peace – those of the distant and the more recent past. Fay and Percy make a great team of detectives and I suspect (hope) there will be many more investigations to come.
5.0 out of 5 starsShe carries us along through time with a big love as her guide

This is a fascinating and sometimes spooky story, which has us following a ribbon through time, back and forth to the 17th century.
However this ribbon has a disturbing and rather scary kink in it, which our story-teller and heroine – Fay – is determined to unravel. She is so down to earth and yet courageous
with her gift of being able to sense another reality which most of us are blind to. She carries us along
through time with a big love as her guide … her passion. But with this love, comes conflict. Fay has to
make heart-breaking decisions which will impact on her life – and the lives of others – in a hugely dramatic way.
I love the cracking pace, with surprising jolts. It\’s a great gripping read!
5.0 out of 5 starsI loved The Rose Trail

I loved The Rose Trail, the humour, sadness, history, mystery and romance not to mention ghosts keep it
fascinating from the first page to the last. I couldn’t put it down.
TheRoseTrail

You are welcome to join the on-line launch party for The Rose Trail this Sunday morning, 11th December between 10 and 12 am. There will be coffee and croissants and the odd glass of Buck\’s Fizz for your virtual breakfast.
There\’ll be lots of information about the background and research for the book and lots of lovely authors to meet who are also donating some great prizes..
Join in and answer some simple quiz questions and you could win a free copy of The Rose Trail ebook. It\’s a timeslip novel set both in the present day and the English Civil War, woven together with a supernatural thread.

Just click on the link below on Sunday morning!

I\’m very excited to announce that my new book, The Rose Trail, is now published!
The Rose Trail is a timeslip novel set in both the present day and during the English Civil War. The complex story weaves through both eras with a supernatural thread.

I do love a challenge and this book presented me with several. Not only was there a great deal of research for the historical section, there were five voices to convey. Fay is the narrator of the piece and a flawed and troubled character. Definitely not your average heroine.

The germ of the idea for this story was born many years ago. I was working as a secretary in a legal firm and had to deliver a will to a house on the Wiltshire downs. With the errand achieved, I looked around the tiny village and felt drawn to one particular dwelling. It was a beautiful house, larger than a cottage, but nothing grand. It was ancient but still stood, square and sturdy, basking in the sunshine and smiling across to the other houses skirting the village green.
As I approached its whitewashed walls, I noticed it was empty. I peered in through the warped old glass windows, tucked deep under the thatched roof. Inside was a large room with a massive fireplace at one end. The floor was uneven, made of large limestone flagstones, glossy from the hundreds of feet that had worn it smooth over time. The ground floor was only one room deep and I could see straight through into the walled garden through the window opposite.
Although the house was much humbler than the Meadowsweet Manor featured in The Rose Trail, it spoke to me of the era in which half the book is set, the English Civil War. I sensed a family at war with each other; conflicted and arguing, heard the clash of swords and the clang of armour. I remember vividly the chilling sensation that crept up my arms, making them spring goosepumps all the way up to my thumping heart.
I knew then that I would never forget the place. I wondered if I had lived there before, in that war torn age, or perhaps I would live there in the future, with a family of my own.
Neither scenario has happened, as far as I know, but the memory remains crystal clear in my mind. Instead of giving birth to children, the moment of seeing into the past has created a story.
It is my fervent wish that I have done justice to the house that spoke to me that day so many years ago and that readers will enjoy the result.

You can find the book here:
The Rose Trail
The paperback will be available very shortly – just in time for Christmas!